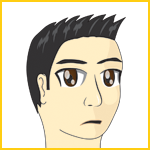 Joey was born in Hong Kong but nicked off to Australia way before the commies took over. In many respects, he had a typical upbringing that one would expect in a westernized civilization which he soon worked out wasn’t that civilized after all. (It could have been worse, of course.)

Anyway, he had to suffer school and studied all kinds of waffle but was inherently the creative type, mainly into visual arts. He wasn’t interested in creative writing during school and wasn’t very good at it. Actually, he wasn’t interested in school at all. In any case, he knew the world was mostly unhelpful to those who wished to pursue an artistic vocation and thus made the practical choice of doing something else, albeit with a degree of spite and bitterness.

Despite all the above and refusing to accept defeat, he practiced various forms of visual arts in his own time. As for writing, it was only after leaving school that he developed a penchant for it, partly to sort out his own thoughts, partly to amuse himself and partly as a coping mechanism.

In terms of “real” work, past and present, he has been/is: an engineer, kitchen hand, law clerk, graphic designer and slush reader/editor.