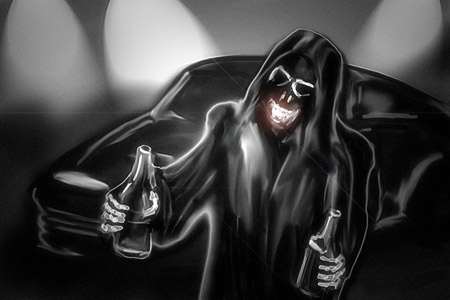 He heel-toe double-clutches from sixth to second. Because he can. The gearbox grates and the engine roars as he makes a sharp right onto the bridge. But the acceleration is palpably pathetic and the red convertible is pulling away.

He should have ditched the semi-trailer when he took this tractor unit.

He glances over the railing, the calm river below mirroring Scorpius and Sagittarius. He grins. How pleasantly ominous and—

There’s a thud and his skull smacks into the roof of the cabin. That must have been a car. Then another thud. Why do these people have to get in his way? It’s 23:17 and he’s got a job to do.

He lets out a raspy sigh. It’s not the same without his grullo stallion… Still, the constellations smile at him and there’s always tomorrow.

The sun is low and Rod Weston wants to shuffle off to home but he squints. Through the glare, he can make out the pale 6×4 cab pulling up to the showroom, the truck’s mangled grill holding a colorful bouquet of twisted scraps. And it almost adds their massive horse logo to it, not to mention his own SUV.

A lanky figure in a black-hooded trench coat disembarks and glides into the showroom. Rod can’t quite discern its face but there’s something about the eyes… they’re either really dark or it’s just sockets. But a customer is a customer.

Rod shrugs and greets the potential buyer with a practiced smile. “Hi, how can I help you, Mister…?”

“Mister Reaper. Or Gary. I require a grey high-performance vehicle. Fuel efficiency is not a consideration.”

Rod winks and nods at the shiny white thing parked right next to them, barely four inches off the marble tiles. “You look like you’re into the classy nightlife scene. Doing the nightly Gary Groundwork, heh?”

“An oversimplification but true,” says the dark figure in a leaden tone.

Rod straightens his jacket. “Anyway, this thing is top of the range. Sold my cousin a red one after he trashed his old car.”

“A bit ostentatious and the equine badge is too small.” Then, with a long bony digit, he points to a glossy, sleek SUV. “I want that in grey.”

“Yes, I work in the transportation sector. I require one in grey.”

“Metallic charcoal is available but it’ll be a four-week wait.”

The figure gestures to the front. “Like that one?”

Rod raises an eyebrow. “That’s… mine.”

The figure leans in close – Rod flinches – and whips out a pair of black driving gloves. “I demand a test drive.”

He chuckles wickedly as he scythes through traffic and closes the gap to the red flash. The engine screams. So does the salesman in the passenger seat.

“Shall we discuss the price over dinner?”

They peel away, the red car speeding off before turning into a carpark of a flashy restaurant.

He zooms around the block several times, laughing maniacally whilst doing opposite-lock corrections before thrashing into the abovementioned carpark… then up the kerb, through the window pane and onto the dance floor to various human exclamations and a burst of soft puffs.

“Impressive ABS, can hear it but can’t feel it,” he says, baring his gleaming teeth to Rod.

And with that, he leaps out, grabs two long necks off the unconscious guy on the bonnet and hula-dances toward the table with bulging eyes, his cloak sloppily flowing after him.

“Richard Weston, you bowled over my stallion. Now it’s your turn. Bitch.”

“Death and a Salesman’s Cousin” was the winner of The Custom Rims Award at Needle In The Hay, September 2015.