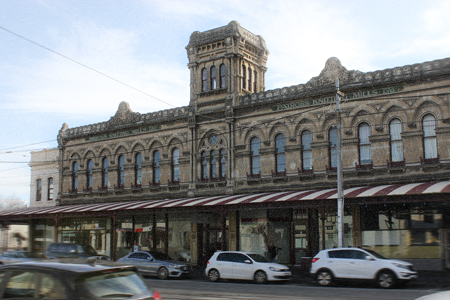 One of the two big men with black stockings over their heads leaned over the counter to grab the cash. The other pointed his pistol at Yuki. She was about to pay for the can of apple soft drink. She glanced at Eva, a classmate, who stood nearby with lips curled and wearing her stupid pink scarf.

“Give me your schoolbags and purses,” the thug grunted.

Yuki got mad. To use perfectly good stockings this way was a waste. And she didn’t like robberies either.

Stuff it. She rifled the can at the thug’s head. A bang followed. The bullet merely ricocheted off her right shoulder. She knitted her brow at the hole in her uniform and, when she looked up, the guy’s head was no more. Crap, she was gonna lose marks for this.

“Good one, Butcher, killing my suspect,” Eva called out, “thought your project was the mob.” Yuki ignored her and the hallway of sneers as she entered the Principal’s Office.

Mr Clarke was red-faced, his hands planted wide apart on his mahogany desk. “YOU KNOW HOW DIFFICULT IT WAS COVERING UP YESTERDAY’S MESS?!”

Yuki squinted as he swiveled his monitor around. It was replaying her body-cam footage in slow-motion: the thug’s head exploding on impact with the can. Admittedly, her response was probably a bit excessive, her nickname “Butcher” not entirely unjustified.

Mr Clarke sighed. “Dammit Yuki. I know you mean well and you’re one of our most gifted students but you can’t go around executing Code Blacks. It’s not just your secret powers at stake, nor even this school…”

Yuki knew the speech. They were all-powerful but not all-knowing and they had to be careful with who they saved or took out. Last semester, she sped at a casual Mach 4.1 to rescue an old lady in a wheelchair stuck at a railway crossing. Aside from the shattered car windows, the old cow turned out to be the mercenary “C-4 Granny”. Somehow, Yuki had missed the email memo. No prizes for guessing who was responsible for sixty-five deaths and the destruction of her favorite hot dog stand two days later.

“…and are you even listening?” said Mr Clarke with a raised eyebrow.

Yuki mumbled a series of expletives as she strode down the street. Given her abilities, she mumbled a few in parallel as well. As she neared Burger Bomb at the mall, she perked up her ears at some distant screech: something over the police radio about a suspicious semi-trailer on Route-44.

Just as well. She had to make up for the ten deducted marks somehow. This was the “Community Project”. She would graduate immediately with a “super” license if she got tops marks for this. No need for further units.

In a second, Yuki whizzed over to an intersection on Route-44. She squinted: two men in a red semi-trailer, a shiny company truck. And carrying her favorite apple soft drink.

How effing dare they.

Yuki blazed toward the moving vehicle, ripped open the passenger-side door – both men were in tactical gear – grabbed one by the vest, dragged him out in front, hurled him through the windscreen and zipped away before anyone could digest what the hell just happened.

She was barely down the road when she asked herself why such well-equipped people would be interested in a semi-trailer of carbonated beverages.

So she dashed all the way back to the now stationary truck.

Yuki leapt into the cabin. The eyes of the driver bulged. He was conscious enough whilst the other was busy bleeding. She grabbed the clipboard beside the seat and read.

She tore off the former’s mask. “Who set you up for this job?”

Yuki wrapped her hand around his neck. “No, I meant the threat you made against the city cemetery. This left Dalesville and was meant for the nearby Burger Bomb. I assume you wanted to carry out an attack so why the detour through here?”

Of course. Eva wanted the top spot. It was always her. That sabotaging bitch. But Yuki interrupted her self-imposed exposition with another realization.

“So what other jobs did you have? Hurry up, I’m hungry.”

The man grinned. “Enjoy your lunch…”

Just as Yuki heard sirens, there was a flash of orange, a wall of heat and she hit the bitumen a hundred feet from the flaming wreckage. She got up, patted her seared uniform and sniffed. Definitely homemade C-4.

That’s it. She’d had enough.

Yuki stomped towards the Principal’s Office.

“I’m sorry, he’s in with another student,” said what’s-her-secretary’s-name.

“I know,” grunted Yuki as she kicked the door open and marched inside.

Eva sprung from her chair whilst Mr Clarke merely frowned. “I’m glad I reinforced that door, given the nature of this institution.”

Yuki pulled Eva’s pink scarf and slammed her head into the desk. “Did you reinforce the desk?” – there was a dent – “Guess not.”

She let Eva slid onto the floor before commencing her expositional rant on how Eva hacked into her email to delete vital memos and organized certain crimes to provoke her, including intercepting C-4 Granny’s goons, making them take a detour.

Yuki frowned. “I’m not accusing Eva of working directly with C-4 Granny. The hag probably detonated remotely when she realized her people were off schedule. Still, Eva would have guessed that.”

Mr Clarke narrowed his gaze. “And I’ll allow you the chance to regain more marks. You may track down C-4 Granny as well as the mob for the project. But no more mistakes.”

Yuki nodded. “One more thing,” she said, pointing at the unconscious lump on the floor, “that was a Code Red, she tries anything and it’ll be a Code Black.”

“The Community Project” was the winner of May/June 2015 Flash Fiction Contest at Aphelion.