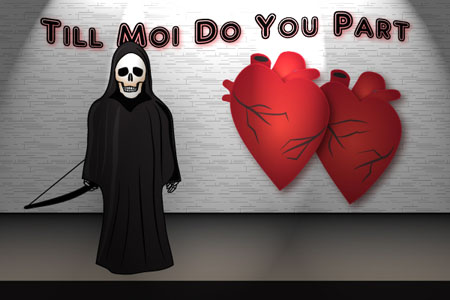 Across the rosewood desk, the two pairs of eye sockets seemed to… sag.

Lowell knitted his brow: definitely no flesh, just two skeletons in black cloaks. He could’ve sworn he heard sobbing from the one on the left whose hood was lined with pink seams.

“What’s the difference?” said the figure on the right, the bigger of the two.

Bony hands slammed the desk. “She says that I’m all about work and don’t share nor care. But that’s not true! I care about everyone! I can prove it.”

With trembling hands, Lowell straightened his tie. The cooking comps have been rating poorly. This guy’s show might resuscitate his career. Either way, Lowell had a vague feeling that a rejection will end more than his professional life.

The sheen of the white marble veneer made the stage look like an expensive mausoleum. At least it didn’t look cheap. Lowell popped four Calmex tablets… then a few more. Behind the lanky host were two overlapping heart-shaped boards. And with way too much anatomical detail.

With a recurve bow in his grip, Death boomed to the array of cameras, “Welcome back to Till Moi Do You Part! I’ve brought in Delilah and her folks” – he gestured aside to three blank expressions, the father also being transparent – “and now it’s time to meet the guy.”

A handsome young man then materialized on stage whilst Lowell dragged out a handkerchief and wiped his glistening bald head, uncertain how these contestants were selected.

The young man patted his very nice suit, then his glazed eyes scanned the applauding audience…

Dave squinted at the skull. “I was…”

“…working at a prestigious accounting firm. I work in accounting of sorts too. Anyway, would you like to marry Delilah?”

“Yes, with children and all that. Stable population growth gives me stable work. But enough about me. What are your aspirations?”

“Do I have to?” asked Dave. There were sniggers from the audience.

Death gritted his teeth. “I’m trying to help you bypass the awkward ritual of serving botanical and confectionary offerings followed by indiscriminate plowing.”

Death’s ocular pits narrowed. “Let’s see what Delilah has to say about marriage.”

“I like commitment but I also want flexibility,” said Delilah, her finger twirling her hair. The audience cheered.

“And we all need some experimentation,” called out Delilah’s mum. The crowd laughed.

“I don’t know these people,” said the transparent man.

“FYI, you fathered Delilah and BTW, it was your fourth mistress who poisoned you.”

“I can bring in someone else.”

Love is in the Air

Dave and Delilah didn’t like each other so Death brought in Odella. She only cared about money so Allecra was teleported in. Dave ogled her.

Lowell squeezed his soaked handkerchief… then jumped at the sight of a black hood with golden seams. “Can you not just appear like that?!”

“How else am I supposed to appear?” Mrs Death responded.

“Yes, he made it before he came here.” She then pointed at the stage. “He does care…”

On stage, Allecra intimated that she and Dave could get hitched, take the prizemoney, have “lots of fun honeymooning” and simply divorce later. That was all “hypothetical”, of course. Then Dave said that “marriage is like a long date” and it was acceptable “insofar as it felt good”.

Death dropped his bow and buried his skull in his calcifying hands. “You people don’t care about sharing in life or death or anything. Can’t commitment feel good?”

Death picked up his bow and stood tall. “I was planning to alternate with each episode, you myopic ingrates!”

The set quaked for a second and the two heart-shaped boards shattered. Then Death drew his bow, an arrow materializing. He shot Dave in the heart, then Allecra…

Then they screamed and scrambled over each other. Probably their default approach to everything, Lowell thought. Death continued shooting as he hummed a familiar tune – some lame love song – whilst Lowell covered his ears and went prone. Arrows whizzed by, slicing air and splitting souls.

Lowell heard Mrs Death bellow, “Darling, share; leave me some!” and, before passing out, he deliriously hoped the board would still pick up this pilot.

“Till Death Do Us In” was co-second place of the What We Talk About When We Talk About Love Award at Needle In The Hay, March 2016.